Recently, we looked back at highlights from 2018 in the Pennsylvania Great Outdoors region, and with 2019 now upon us, we’re looking forward to a year full of new beginnings and endless adventure across our five-county area.

Visitors to Cook Forest State Park will soon have a new visitor center to explore, just north of the Cooksburg Bridge. Construction crews broke ground in September 2017, and the new office should be ready to open to the public later this year. It will feature interactive exhibits about the park and information on things to do both in the park and the surrounding area. A hiker takes a moment to take in the massive hemlocks and white pines in Cook Forest State Park.

Gobbler’s Knob will also be getting a new visitor center as the centerpiece of the Punxsutawney Groundhog Club’s “Destination: Punxsutawney” campaign, part of a larger initiative to attract more year-round tourism to Punxsutawney. The center will feature interactive exhibits about Punxsutawney and the history of Groundhog Day as well as a souvenir shop, and it will also serve as a groundhog sanctuary for Phil and his woodchuck crew. The Jefferson County Courthouse celebrates its 150th anniversary this September, and Brookville locals involved with the town’s history are hard at work making plans for a commemorative event. Stay tuned to our blog, event calendar, and Facebook page for updates!

A Ridgway native has been hard at work for months cleaning out and restoring the old Elk County Bank, which will soon open its lower level as a brewery and its upper floor as an Airbnb. The Ridgway Heritage Council recently released photos of the decorated rooms available for rent, which feature a modern ambience while still paying tribute to Elk County’s woodland landscape.

Trail lovers have several updates to look forward to in the Pennsylvania Great Outdoors region this year. In Forest County, Jenks Township staff in Marienville are turning the town’s historic train station into the anchor of an upcoming recreational hub along the in-progress Knox-Kane Trail. In Clarion County, the Allegheny Valley Land Trust recently received a substantial grant from the state Department of Conservation and Natural Resources to restore and ultimately reopen the Brady Tunnel, a half-mile train tunnel along what’s now the Armstrong Trail. 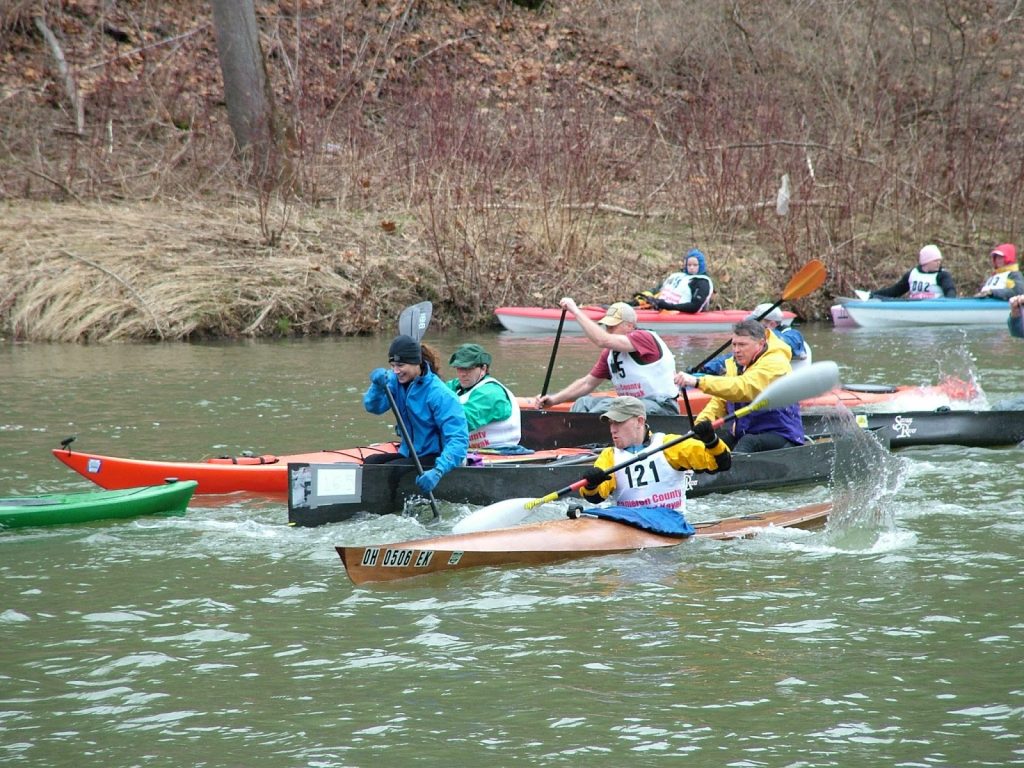 Paddlers hit the water in the former Cameron County Canoe and Kayak Classic, now reorganized as the Paddle Sinnemahone race.

Cameron County has restructured some of its key annual recreational events and is now presenting the April 6 Paddle Sinnemahone canoe and kayak race, September 28 Pedal Sinnemahone bike race, and October 19 Sinnemahone Ultra Trail Run as three components of the Sinnemahone Triple Crown. Interested racers can compete in just one, two, or all three events.

Finally, PBS travel host Erik the Travel Guy visited the Pennsylvania Great Outdoors region in 2017 and aired an episode last year on his show Beyond Your Backyard about his explorations here, and he’s coming back this year to film and share more aspects of this special part of Pennsylvania.

There’s always something new and exciting happening here, so stay tuned to our Facebook page, blog, and event calendar to learn the latest. For more information, go to VisitPAGO.com or call (814) 849-5197.